Can an Empress be the Equal of her Emperor Husband? Empress Theodora and Attendants, 547

Empress Theodora (c. 500-548), the woman in dark purple, was an important historical leader in the Byzantine Empire, yet history has not been kind to her. Her origins are unknown (she was not born a royal, so no one recorded her early life), and her critics have confused the issue. Perhaps the worst, and also most famous, assertion was that she was a circus performer and a whore.

Even though her beginnings are unknown and the worst parts may just be unfair gossip that made it into the history books, she attained a high status, perhaps even co-ruling alongside her husband Emperor Justinian (c. 482-565), a more powerful role than ‘first lady.’

What are we to make of the stories of Theodora’s unsavory past, alongside praise of her leadership and her celebration in art? What does this say about the challenges faced by women in power?  Art history tells us a different story than history and rumors, and shows that Theodora was a remarkable and powerful woman in the Byzantine Empire.

Presented with the art historical evidence here, we can see that Theodora was a near equal to Justinian, each sharing high status with multiple attendants and fine costumes. In the artwork, the deep purple of her cloak was a color reserved for royals, because of the expense and rarity of purple pigment. Theodora’s headdress is heavy with jewels, and her head is surrounded by a halo to mark her as special (halos are not only for holy figures, though she was made a saint after her death in the Eastern Orthodox Church).

This mosaic is installed in the wall of San Vitale in Ravenna, Italy, a Byzantine church built under the sponsorship of Justinian and Theodora. Theodora and her attendants process towards the altar (towards the left in this work—you can see their bodies slightly turning), while opposite, in a separate mosaic (see below), Justinian and his attendants do the same. Justinian brings a loaf of bread while Theodora provides a rather large bowl of wine—they are providing the materials for communion to the congregants. The emperor and empress never made the trip to Italy to consecrate this church, but the mosaics serve to symbolically show their support and presence. 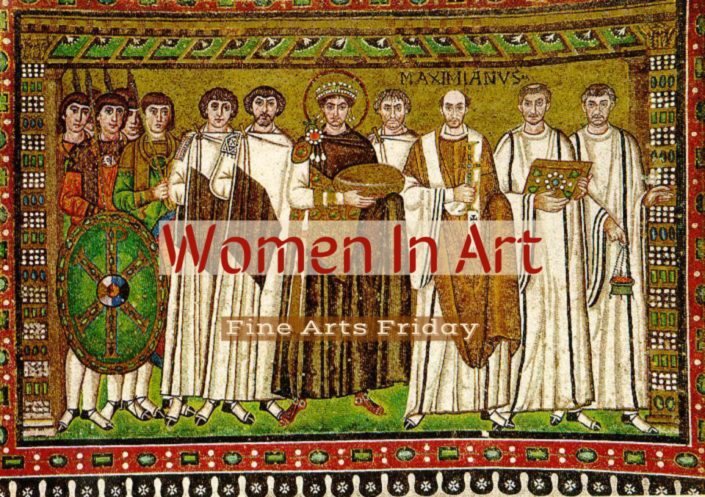 In Byzantine society and religion, women were accorded lower status than men, so the nearly equal treatment of Theodora here deserves note. In churches such as San Vitale, or Hagia Sophia in Istanbul (formerly Byzantium, another church this couple sponsored), women and men worshipped separately. A few clues to this separate status are the greater depth of the green ground in front of Theodora and her crew – they stand further back, by implication. Also, note how Theodora will be passing through a doorway as she makes her procession—she’s in a separate room, even though the frames of the pieces match.

So Theodora is not quite the equal to her emperor husband, but she’s very close, and this artwork shows an iconic woman in history stepping beyond her past to become a powerful ruler.