Breast Cancer, Then and Now…. A Personal Journey 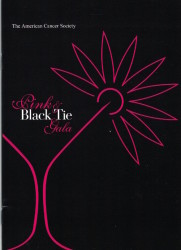 What follows are remarks I made at the time I was honored by the American Cancer Society at the Pink and Black Gala.

These remarks were made before a gathered audience at the event after I had received the award from Stacey London and Michele Ippolito, my office director.

I took the opportunity, while looking out at the remembrance section set up for the proceedings to comment about cancer in my life and to offer my perspective on what has positively developed in the treatment of breast cancer in the scope of my career.

In delivering the remarks, I was reminded of an incident in my early life that I hadn’t thought of much before that night that might have been my first step towards my later involvement in the fight against breast cancer.

I hope you’ll find these remarks interesting and compelling and hopeful about where we stand in the war against breast cancer….

I am looking over at the remembrance section and the lighted candles in the room here and I am reminded of how many of us here in this room tonight have been affected by cancer. Such has been the case in my own life. I guess I should be lighting some candles. One might think that simply because I work as a surgical oncologist or a breast oncologist that maybe I would be granted some immunity from the disease. I haven’t been.

When I was about ten years old my paternal grandmother was stricken with breast cancer. I remember there being a kind of a hush in the house, then a flurry of activity, and people talking behind closed doors. Grandma had breast cancer, was having a mastectomy at the university hospital, and then there would be cobalt treatment. I had my ears to the door and for the first time heard the words cancer, and radical mastectomy, and cobalt treatments. Little did I know that these words would become a part of my permanent everyday vocabulary. And I wasn’t smart enough to realize that this was my first glimpse into what would become my life’s work.

But the atmosphere was different then. These words–cancer and radical mastectomy and cobalt treatment were not spoken–they were whispered, as though there was something shameful, something secretive, something embarrassing, something worse than bad about having this disease. Look how things have changed since that moment. Here we are tonight at a gala focused openly on what? Cancer. Breast Cancer. The conversation is now public and this is good.

And we have the American Cancer Society to thank for this. There hasn’t been an organization that has done more to educate the public and to change attitudes about this disease than this organization and they deserve our thanks and applause….

I go back further than most in this room in the recent history of cancer. I was in high school when the surgeon general’s report on smoking was released. I was finishing college when Nixon declared the War on Cancer, at the same time that he was prosecuting a war on another front. In the early seventies the wife of President Gerald Ford and the wife of Vice President Rockefeller were very public about the mastectomies that they had for breast cancer. I read Susan Sontag’s essay on cancer, “Illness as Metaphor” when I was in medical school. I went to medical school to become a psychiatrist, ended up a surgeon and then an oncologic surgeon and then an oncologic breast surgeon. I have been in practice for twenty seven years that was preceded by eleven years of medical school, residency, and fellowship.

What has happened in that period of time? Much has happened. Like so much in the modern world, the pace of change has been rapid, mind bending, almost mind numbing. When I was first exposed to the breast cancer world as a medical student, we were doing mastectomies and radical mastectomies. This was radical surgery, disfiguring and it was awful.  Now we hardly do any surgery at all. A small incision here, another smaller one under the arm, and the patient is eating lunch in the recovery room. Reconstructive surgery was almost never done, now it is an option for every patient.

Chemotherapy was a devastating experience for many, maybe worse than the disease itself. This has improved significantly. We have better drugs, better support for the side effects, and we give the drugs now more intelligently. Radiation therapy has changed, evolved, become surgically precise and allows someone like myself to do minimal surgery. Support for the cancer patient comes from many different quarters and we have almost gotten to the point where if one doesn’t do yoga during therapy you are considered non compliant.

Deaths from cancer have fallen dramatically across many tumor types in the last thirty eight years and the progress in breast cancer has been equally as dramatic. I don’t want to get too far ahead of the developments, but I feel like we have almost gotten our arms around this disease and are on the verge of controlling it. Patients still slip through the cracks, but we are getting close, very close to controlling it.

….in closing, I have a seventeen month old granddaughter. I most certainly don’t want to bring her anywhere close to a cancer discussion or for her to be a part of our adult world with our concerns regarding cancer and sickness and suffering. But I want to mention her in another more positive context. It would be my fervent hope, after nearly four decades of work in this field, that breast cancer will not be the scourge for her and her generation of women that it has been for the last two-three-four-five generations of women. Then we will have made progress that all of us can applaud.