Breast Cancer on the Run in October: (Day 10) Nixon’s Other War-The War on Cancer

The National Cancer Act of 1971 is an important milestone in our effort to control and then eradicate breast cancer. 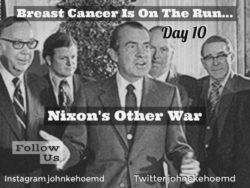 Richard Nixon signed the National Cancer Act of 1971. It was dubbed the War On Cancer. It was not Nixon’s term. He was already deeply involved in another war in Viet Nam.

War analogies persist in describing our struggle against disease in general and cancer in particular. Today’s effort, though, is dubbed a Moonshot. Different terms. Different concepts. Ironically, Nixon was president when we landed on the moon, the culmination of our original Moonshot effort through NASA.

Richard Nixon is one of the most enigmatic figures in our history and culture. It seems incongruous that his name is inextricably linked wth The War on Cancer, our national effort to end cancer. As nothing is clear with Nixon, the success of this effort launched over four decades remains unresolved.

The National Cancer Act of 1971 drew new attention to cancer and strengthened the federal health and cancer organizations, such as the National Cancer Institute. Large amounts of money were allotted to the effort and funded groundbreaking research and clinical efforts.

In 1971 there were 2 million cancer survivors. Today there are over 4 times that amount.

Critics argue that despite all the efforts and money, we aren’t as close as we should be to understanding the disease with certainty. The problems remain complex, diverse, and wide ranging. Theories explaining the disease have been posited and then discarded. Maybe we don’t know that much. Likely there was misuse of the taxpayers’ money.

It is unlikely that cancer will be defeated in a large pitched battle. Instead, smaller skirmishes will slowly advance our progress. Small contributions from many quarters will add up in time.

It was good that President Nixon listened to the philanthropist Mary Lasker and signed the legislation. Nothing tricky here…..