As a surgical procedure the radical mastectomy as primary treatment for breast cancer was the standard for decades. In retrospect this is somewhat surprising as we have witnessed rapid changes in the popularity, use, and efficacy of multiple surgical procedures across many surgical fields. 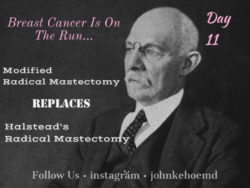 The radical mastectomy as a surgical procedure in the United States was credited to a New York and Baltimore surgeon named William Halstead. He is an interesting figure in the History of Medicine.

The rationale for the procedure was that breast cancer spreads in an orderly fashion from the breast to the regional lymph nodes to the blood and other organs.

This concept of the behavior of breast cancer lead to the conclusion that a radical removal of the breast, lymph nodes, and surrounding structures was needed. After Halstead there were some who wanted to extend the operation and take even more neighboring structures.

Fortunately, there were some who questioned that all the neighboring structures needed to be removed. Thus, the modified radical mastectomy was born.

It was found that the surgeon could remove the breast and lymph nodes and preserve the chest (pectorals major) muscle without compromising survival. It was also more acceptable cosmetically. By the late 70s this operation became the new standard.

At the same time there were others “radically” questioning whether a mastectomy needed to be done at all to cure breast cancer. Like so many developments in breast care, this moved slowly. And those promulgating it were subject to no small amount of abuse by the surgical establishment.

To me the significance of the modified radical mastectomy is that surgery for breast cancer took its first step away from its radical roots and started a trend towards smaller and smaller operations–less radical, more modified, more acceptable cosmetically, kinder and gentler….