Breast Cancer on the Run in October: (Day 12) Is Tamoxifen the Magic Elixir?

OCTOBER 12: IS TAMOXIFEN THE MAGIC ELIXIR?

How often in our discussions about breast cancer prevention and treatment have we fantasized: if there was only a pill that we could take to prevent breast cancer…. 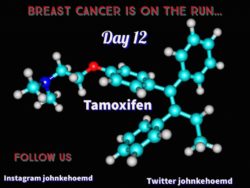 Ironically, when a pill for such a purpose surfaced, there was little fanfare. Why? I can only surmise that the pill–Tamoxifen–had already been thoroughly vetted in the medical journals and in the press as to its side effects, which can be significant. But, still, it was a drug that could prevent some breasts cancers. Why weren’t we putting it in the water supply?

The chemical compound that was eventually to become Tamoxifen (Nolvadex) was first looked at in the 1960s as a morning after contraceptive pill. In some instances it blocks the effects of estrogen and in some cases it promotes the effects of estrogen. This is the explanation for its problems in promoting uterine cancer, while preventing breast cancer. It pretty much failed as a morning after pill, but the anti estrogen effects were of interest to the breast cancer researchers.

Through a series of false starts, clinical trials and patent issues, the drug was ultimately approved for use in breast cancer treatment. Either alone or in combination with other drugs, it has become a valuable mainstay in our treatment protocols leading to an increase in survival rates for patients who are eligible to use it.

Logically, it was asked if Tamoxifen could play a role in preventing breast cancer as it had for decreasing recurrences in those already with the disease. Trials were constructed addressing this for high risk patients. Lo and behold, it significantly decreased the incidence of breast cancer in these groups.

This significant decrease in the incidence of breast cancer was not good enough for the skeptic. Like everything in our effort against breast cancer, a collection of baby steps leads to longer strides. The magic pill, the magic elixir, may still emerge. For now, let’s be happy with this news and keep the fantasy alive….