Breast Cancer on the Run in October: (Day 13) Implants, Expanders, and Breast Reconstruction

Breast cancer patients don’t love the Plastic Surgeon any less than everyone else who wants to look and feel their best. Having breast cancer and losing a breast is a double whammy. 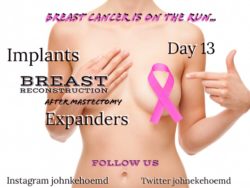 The breast cancer patient isn’t trying to look younger, more vital, or prettier. They are trying desperately to get back to an earlier “normal” and maybe with a few nips and tucks along the way.

The shadow of Halstead’s radical approach was cast over the earliest thoughts of reconstructing, resurrecting, or bringing back what had been so painfully lost. He apparently thought any attempt to disturb what he had wrought surgically would put the patient at risk of the disease he had labored so hard to eradicate. Not sure what his thinking was on this….

Interestingly, the first attempts at reconstructing the chest wall after mastectomy involved using native tissue to fill a defect or to allow closure. Attempts were made to recreate the breast mound, again using the patient’s own tissue, either transplanted or mobilized from neighboring areas.

This approach was soon abandoned. In the later development of breast reconstruction in the last few decades, variations on these earlier techniques  would return and open up new and interesting reconstruction possibilities.

What initially accelerated the reconstruction effort was the development of the silicone breast implant in the early 1960s and then the breast expander, which was used to slowly stretch the remaining skin to accommodate an implant placed at a later time.

The timing of the reconstruction and the ability of the Plastic Surgeon to maximize cosmetic results was given new latitude.

It is somewhat deflating to look at these implants and expanders that are rather inert, prosaic structures made of synthetic materials. It is hard to imagine their role in recreating an organ that is at once sexual, aesthetic, and functional.

Many parts make up a whole. Isolating one or another of these parts and looking at them in isolation never works well. What does work well is restoring a semblance of what once was, restoring wholeness.

And that is why breast reconstruction has been so important to the well being of the breast cancer patient.

31 Days in October, Blog Tags: BREAST CANCER ON, breast cancer on the run
Previous Day All Posts Next Day