Breast cancer broke out into the open nationally and culturally during a two week period in 1974. Likely, there are few who will recall those two weeks in late September/early October 1974.

I remember it clearly. I was waiting to be accepted to medical school and was paying attention to everything medical in the news and out of the news. 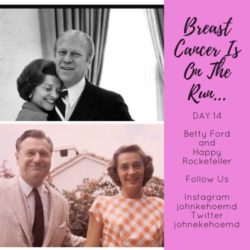 Gerald Ford was President, having succeeded Richard Nixon after he resigned. His wife, First Lady Betty Ford, a former dancer, was diagnosed with breast cancer. Ford has been accused of stumbling through his presidency, but the two of them decided to go public with the news. What a decision! We were all shocked to learn of it and to understand the treatment–removal of her breast. 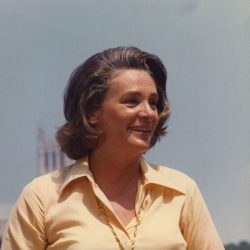 Nelson Rockefeller was Ford’s Vice President. His wife, the elegant Happy Rockefeller, was the Second Lady. Having heard of Betty Ford’s diagnosis. she examined herself and found a lump (this is such a common scenario). She was found to have breast cancer on one side and a premalignant growth on the other side. She had a double mastectomy. The nation was doubly shocked. The wives of the President and the Vice President develop breast cancer within weeks of each other and all of us had to confront what the treatment entailed.

Afterwards, nothing was the same. The disease was out in the open. This was no longer a private, hush-hush disease. We couldn’t look away from it. We couldn’t deny that the operation to treat it was 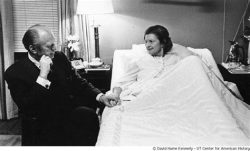 upsetting. We couldn’t imagine our wives or mothers or sisters or friends being stricken with the disease and then being subjected to the removal of a breast or both breasts as a treatment.

And we were removing that organ, the breast, perhaps indiscriminately, perhaps not. And everybody, even the most hardened in our society and culture, felt uneasy about this. I did, but I had no idea at the time that treating breast cancer would become my life’s work. I suspect that neither Betty Ford nor Happy Rockefeller would want their legacy to focus on their suffering with breast cancer and the treatment. Yet, they are two wonderful, brave women who took a disease public and opened a floodgate or inquiry, activism, and public sharing of medical problems.

Perhaps we should pause and reflect and appreciate what they unwittingly earned for the women of the world–an awareness of a disease that would, in time, change the medical establishment such that nobody would have to endure what they endured…..privately or publicly….