Breast cancer, like all cancers, is characterized by the abnormal growth of specialized cells. The cells lose their specialized function in the breast. Normal mechanisms regulating the growth and maintenance of these differentiated cells are then lost to the evil intruder. 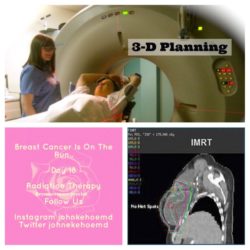 Without radiation therapy the recurrence rate in the affected breast is unacceptably high in the majority of patients.

With the development of the linear accelerator and establishment of delivering radiation doses over a number of sessions (fractionation), the utility of radiation therapy for breast cancer was secured.

For treatment planning in the pre-1980 days, 2 dimensional X-rays were used. The breast is a three dimensional structure as are tumors, lumpectomy cavities, and other other organs in the body.

CAT (Computerized Axial Tomography, also known as CT scanning) developed in the early 1970s and was widely utilized by 1980. CT scanning showed the body in 3 dimensions. This was especially useful to the radiotherapist.

Using technology only available with the development of the linear accelerators and 3 dimensional radiation planning using CT scanning, dose distribution of radiation could be more precisely shaped depending on the target tissue or tissue to be avoided.

The most sophisticated form of this approach is called by the complicated acronym IMRT (Intensity Modulated Radiation Therapy). You don’t have to remember that.

Viola! Radiation therapy could be more precisely delivered to an anatomical site with beams that could be changed depending on nature of the tissue targeted or to be avoided and could be safely delivered with fewer complications by dividing the treatments into daily doses over a number of weeks.

All you need are a few computers, a couple of expensive machines, and a few smart people. And, hopefully, insurance companies and payers that will allow it.