Close on the heels of the surgical community settling on a less aggressive and distorting breast operation for the treatment of breast cancer, a new development emerged in the surgical handling of lymph nodes in the axilla. 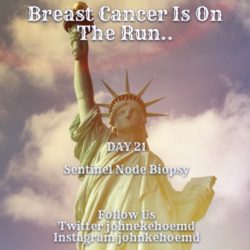 The development of a surgical technique used to treat another cancer (melanoma) pushed breast surgeons even further away from their radical roots.

As we have discussed earlier, breast cancer spreads to the lymph node area into the axilla. Just when it makes its way out of the breast and into the  axillary lymph node basin is a matter of conjecture.

As the trend in breast surgery was always towards smaller surgeries, some pioneering surgeons proposed smaller, less morbid operations in the axilla. Nodes were not removed to improve survival, but to accurately stage the disease and assist in decision making regarding chemotherapy. A different concept.

The sentinel node technique carried this concept further. It was developed by surgeons treating melanoma who also had to deal with a cancer spreading to local lymph nodes. They speculated that cancer spreads to a single node in a lymph node basin before it spreads to the other neighboring nodes.

Identifying that node, called the sentinel node, and checking it for the spread of cancer would tell us if the cancer had moved into the lymph nodes.  If it hadn’t, additional surgery was unnecessary.

The technique was subjected to clinical trials for both melanoma and breast cancer and confirmed. Now there would be far fewer large lymph node dissections in the axilla with the accompanying pain, immobility, and arm swelling.

Interestingly, the breast surgical community very quickly adopted this technique, perhaps learning that reactive resistance to new surgical techniques and changing concepts of the disease was a losing approach.

I have included the image of Lady Liberty as she sits in New York Harbor, arm outstretched, axilla exposed. We all know her larger meaning and appropriating her for this discussion may be taking matters too far.

But for the purposes of this discussion we see a woman standing tall, free, in control, her arm mobile and raised to the sky, her axilla exposed with no restrictions or arm swelling, liberated from the scourge of too much surgery….