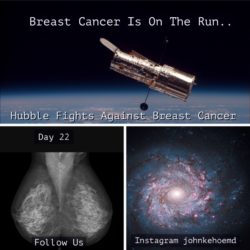 Throughout my career, there always seemed to be a search for a new way to find breast cancer before it becomes clinically evident. Analog mammography was successful early on. It relied on X-rays that pictured the breast. The images were them printed on film. Small improvement were made in this technique that allowed more widespread use.

Telescopes on the Hubble spacecraft were designed and then improved to look deep into space. The technology for Charge Coupled Devices (CCDs) was upgraded by the Hubble program to sharpen light images coming from distant outer space and then printing them on computers for analysis.

Lessons learned from NASA in partnership with outside industries for improved imaging in space were then applied to mammography. Images were converted to digital files that could then be expanded and manipulated for clearer viewing.

The technology was initially used in stereotactic biopsies systems and then later applied to performing mammography. The clinical advantage of digital mammography to date have been improved imaging of dense breasts, primarily in premenopausal women. Radiation exposure is also reduced some. Images can be produced much more quickly. Copying and archiving images is much more efficient than bulky films.

We live in a digital age and digital imaging technology has arrived. As usual, there are some downsides to this technology mostly regarding cost, an increase in false positive findings, and disappointment that only a small group of women benefit from the new technology.

Looking out into space or looking into the details of a vastly smaller and important area of our anatomy….we continue to improve.