Breast Cancer on the Run in October: (Day 23) Chemotherapy Smorgasbord

Today the medical oncologist is presented with a smorgasbord of choices for their patients who are being considered for adjuvant chemotherapy. And patients are confronting an alphabet soup of acronyms to describe their regimens.

Ironically, while surgeons were learning to be less aggressive and accepting smaller operations to treat breast cancer, their chemotherapy partners were becoming more expansive and aggressive. 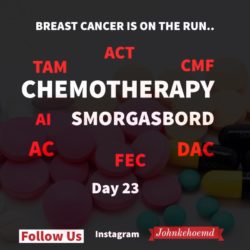 The efficacy of adjuvant chemotherapy for breast cancer after surgery was firmly established in the early 1980s. Refinements would follow as the drug companies provided new drugs and medical oncologist put together new and imaginative protocols that were then verified by a large variety of disciplined clinical studies.

The combination of drugs used to initially establish the efficacy of adjuvant chemotherapy was replaced or changed by new combinations of stronger drugs and more potent regimens. Anthracyclines and Taxanes were added to the mix, as were even newer drugs to block certain growth factors over expressed in some breast cancer cells.

Involved also in adjuvant chemotherapy regimens for longer term treatments are anti estrogen drugs, whether an estrogen receptor blocker like Tamoxifen or the various Aromatase Inhibitor drugs which decrease the production of estrogen in post menopausal women.

Picking from the smorgasbord is not a random act. Medical oncologist, as always, have looked at various patient and tumor factors in selecting a regime for their patients. As staging a breast cancer determines treatment, categorizing patients based on features of their tumor determines the best regimen for any particular patient being considered for adjuvant chemotherapy.

Taking old fashioned chemotherapy doesn’t make anyone happy. But with improving efficacy in reducing mortality and new possibilities for treatment, the medical oncologist is making the effort much more rewarding.