I started this series talking about the role of women in offering support to breast cancer victims, raising awareness about the disease, putting pressure on the medical establishment to change, and raising money for research.

The Woman’s Liberation Movement developed while I was in college in the late sixties and grew rapidly thereafter. I can almost superimpose the timeline of the growth of this movement as a cultural and political phenomenon on the timeline of the recent changes seen in the treatment of breast cancer. 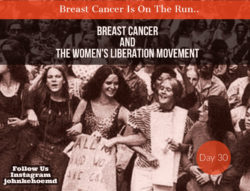 Both sought to liberate women, whether from lives that were socially or professionally truncated or from a brutal disease whose treatments were disfiguring and disorienting.

As a world of choice permeates the vocabulary of the Women’s Liberation Movement, choice in the treatment of breast cancer came into play during this time. Laws were passed to insure that women were offered breast preservation as an alternative to mastectomy once the efficacy of lumpectomy was established.

As men were coming to understanding women in a new way, the high priesthood of the surgical and medical establishment was forced to confront new realities in this new environment. Therese Lasser, a NYC resident, had a radical mastectomy. She was so upset with her male surgeon who wouldn’t pay attention to any of her inquiries about “female matters” after radical surgery that she went on to find Reach for Recovery, one of the first self help groups for breast cancer patients. Some surgeons at the time would not allow their patients to access this service. As a surgeon, you can’t act like that today, thankfully.

As the Women’s Liberation Movement opened up the professions for women, women physicians naturally gravitated to fields like gynecology and the breast cancer subspecialties to treat other women. The breast cancer specialty fields, at least in New York City, are filled with dedicated women sharing the goals, sentiments, experiences, and aspirations of their patients. This is a big change from the time I was in medical school in the mid seventies and there were only a handful of women in my class.

Thus, bra burning is no longer necessary….in so many ways.