Breast Cancer on the Run in October: (Day 6) From Marie Curie to Linear Accelerators

Can a quantum leap in knowledge and technical know how take place painstakingly and slowly over a half century?

Picture here is a linear accelerator (LINAC). Its appearance on the world in 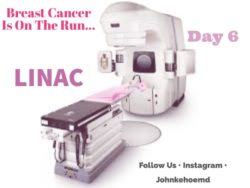 1953 at Hammersmith Hospital in London and two years later in the United States changed everything for women with breast cancer. But it would take some years after 1955 to fully utilize this advancement in technology to treat breast cancer without mastectomy.

The most famous name associated with radioactivity is Marie Curie from the late nineteenth century. From her time to the mid 1950s, radiation therapy from radioactive sources lurked in the shadows as a therapeutic tool in the fight against cancer.

Radiation therapy as used to treat bacteria, tuberculosis, and some superficial cancers. Direct contact was necessary. Most non contact sources of radiation (external beam) had too many complications and side effects, primarily involving the skin. Use of fractionating doses (giving multiple smaller does of radiation over time) started to address these concerns.

Without overwhelming you with the physics and the energy considerations, the development of the linear accelerators allowed a therapeutic dose of radiation for the treatment of cancers to penetrate into deeper parts of the body without destroying the skin.

In time, the new technology and new methods emerged in the treatment of breast cancer and secured breast preservation as a viable option for breast cancer patients, another quantum leap in the evolution of modern breast cancer treatment.