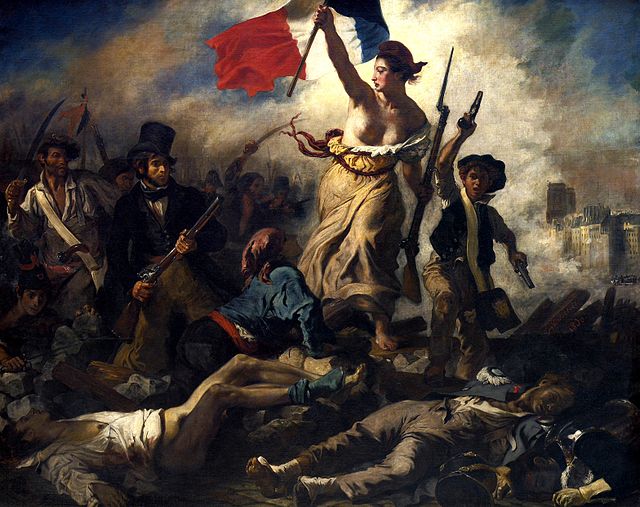 You might wonder why this powerful woman steps barefoot and barebreasted across the barricades of the 1830 French Revolution: more akin to a classical goddess than a living woman, she’s an allegory of the idea of liberty.

This painting has become the visual icon of a series of French revolutions, beginning in 1789, which aimed to overthrow the monarchy and the aristocracy, and establish a new social order, under the slogan “liberty, equality, fraternity.”

Here, Liberty is personified by the woman striding across a barricade of debris, charging forward with a crew of Parisians from all walks of life: a gentleman, a scholar, and a laborer frame her. In the background at the right, the towers of Notre Dame Cathedral rise out of the smoke.

Eugene Delacroix has painted a scene of a specific moment, in a specific place: Paris in 1830, the male figures demonstrating fashions that fix them in specific roles and at a specific time. Yet Liberty is timeless – she wears a plain dress with sash around the waist, which could be either contemporary fashion or the toga of an ancient Greek, considering that all decorative details are hidden where the fabric is bunched at her waist and off her shoulder.

Her bare foot on the broken wood and stones of the barricade is another clue to her timelessness: it’s an impractical choice for a real woman in this time and place – even the corpse below her who has been robbed of his pants retains a sock – but a goddess is impervious to splinters and blisters. More than a mere mortal, Liberty leads the people of French to unite and fight for ideals.

This painting continues to inspire ideals in viewers, and it has been reworked to represent other revolutions. Liberty inspired the Statue of Liberty, a gift from the French people to the people of the United States, acknowledging the importance of both the American and French Revolutions to political and cultural developments in world history.

Marsely Kehoe earned her doctorate in Art History at the University of Wisconsin – Madison, and her Bachelor’s Degree in Art History and Foreign Languages at Kenyon College.  Her specialty is Early Modern Dutch Art, with a focus on the Dutch colonial empire in Asia and the Caribbean. Find this other Dr. Kehoe on Twitter @marselykehoe