Science and the Artful Clinician on Science Day

Yesterday (April 22) was Earth Day or Science Day or some combination of the two. There were marches supporting Science which is a 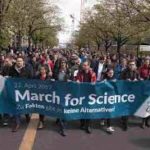 little like marches supporting motherhood. Whatever political agenda may be in play here, I have no problem supporting Science and certainly in the work I do as a physician.

For the past forty years that I have been in the medical field I have heard numerous complaints about the American healthcare system. Actually, over those forty years, the complaints have been pretty constant; they never seem to change. In listening to these complaints and the emotions surrounding them, you would think we Americans have the worst medical care system in the world.

There are obvious shortcomings. Yet, despite these shortcomings, the clinical/scientific/research communities within Medicine soldier on, seemingly unfazed. You don’t need me to tell you how unbelievable these advances are. Look in your medicine cabinet or tap that artificial joint that now allows you to play tennis again.

We are in the golden age of Biology. We are on the threshold of new advances in Genetics and the Neurosciences. We may be in the middle of a medical and scientific revolution unknown in any other epoch in human history.

seemingly flawed.  While I respect the nature of the complaints and shortcomings, they haven’t seemingly impeded the clinical/scientific/research communities from providing us with amazing advances.

Perhaps even more remarkable is that this progress has occurred with almost everyone in society, from politicians to social do gooders to bureaucrats to lawyers, weighing in and trying to influence the system based on their own agendas. Sometimes this involvement is positive, sometimes not.

The system, for all its shortcomings, is resilient. And that resilience stems from the clinical/scientific/research communities working together and maintaining their focus despite all the negative noise that swirls about them. Science has it own momentum and internal rhythms.

In the end, after all is said and done, it is the working of the scientific community that directs itself into the artful clinician that trumps all the shortcomings.

On the day that there were marches for Science, perhaps we should focus on all the good Science does for us in Medicine despite mounting criticisms or concerns about funding. The good work will go on….as it always has….a new way will be found…..Science always triumphs; we can’t hold it back.