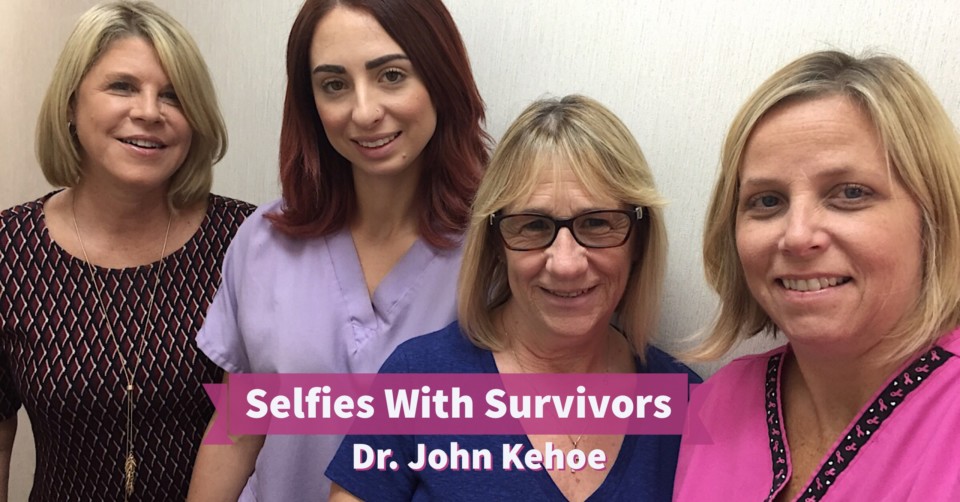 Today’s survivor (in the dark blue top, 2nd from right with staff members and a rep) fell into a sinkhole and saved 4 children. When she fell into the sinkhole of breast cancer, 3 children helped save her.

IN HER OWN WORDS: I am a survivor in more ways than one.,,,I used to be a school bus driver. On January 16, 1996, my bus was swallowed by a sinkhole. There were 4 kids on the bus, a matron, and myself. The bus was leaning on a gas line in the hole. I had to help all the children get out of the bus safely through the driver’s side. Today, I suffer from post traumatic stress disorder and have back problems but I thank God that we all got the children out alive. I survived that.

My friend gave birth to triplets in 1999. I started helping her out by taking care of the kids when she went back to work. These babies helped me get through my days and not to think about my accident all the time.

Then on December 2, 2003, I was diagnosed with Stage 2 breast cancer. I had surgery on December 15, 2003. After that, I had to go through chemo for 3 months. Every time I had chemo my husband would take me for pizza. For some reason, I craved it afterwards. Then I had to go through a month of radiation. I lost all my hair.  I tried to stay as positive as I could. I was not ready to die. I was scared and used to cry but still I would fight.

By this time, my friend’s triplets were in pre-k. I would go and get the kids at school and watch them until my friend came home from work. Again, these kids had alot to do with keeping me happy after my ordeals. I have helped take care of them their entire life. Today they are 18 years old which is hard to believe. Thank God for those kids and thank God I’m alive.

When the bus was swallowed by that sinkhole, I helped rescue children. The triplets may not know it, but as children they helped rescue me from my personal sinkhole—breast cancer.