The Beauty of Human Kindness 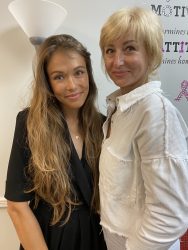 Pictured on the right in the black blouse is a young woman named Milena Leasevich (she gave permission to use her full name). Pictured on the left is a patient of mine from Belarus who doesn’t speak a word of English.

These two women, complete strangers to each other until a few months ago, came together under interesting circumstances that reveal much about the nature of human connections and about how wonderful human beings can be to complete strangers, even while putting themselves into harm’s way.

Milena accompanied the patient to my office for her initial visit. I thought she was a niece or a sister or possibly even a daughter. Later, I learned that they were not blood relatives. They had only recently been introduced to each other.

Milena had received a call from a friend of her parents who used to live in the same town/village in Belarus from which the patient came to this country only a few months ago. Milena herself was born and raised in Belarus before coming to the United States after studying International Business for four years in Amsterdam. The friend asked whether Milena could assist a fellow Belarusian and Milena graciously accepted.

The patient’s medical condition was complicated, and Milena translated for her. She spoke perfect English and was familiar with medical terms as she has had medical issues herself. All communication between the office was done through Milena. She was present for every visit to my office. She answered phone calls for the patient. She interacted with the staff making arrangements for her surgery. She accompanied her to radiology visits and doctor’s visit for medical issues surrounding her surgery. She escorted the patient to the surgical center and waited through the surgery and escorted her home. It was Milena who visited her after surgery and reported her condition to me and the staff.

I guess to understand “why” means probing deep into the human psyche to understand how we perceive our connections to other human beings and how humans express sympathy, empathy, and the need to help others in moments of distress.

What impressed me and the staff about her was not so much that she wanted to help or felt the need to help someone who grew up in the same town/village as her parents. Rather, it was the intensity and depth of her effort, while putting herself at risk because of her own medical issues in the Covid-19 era. She richly deserves a “shout-out.”