Pieter-Paul Rubens is known for filling his Biblical and mythological paintings with half-clad round fleshy women, many of who are modelled after the woman shown here. She’s Rubens’ second wife, Helena Fourment, and he was really proud of her beauty, youth, and, indeed, her fleshiness.

Helena was the niece of his first wife, and she was very young when they married, only 16, when Rubens was 53. Even contemporaries were shocked by the age difference. Yet Rubens appeared to dote on her, filling his paintings with beautiful blond women who looked a lot like Helena.

Showing off Helena’s lumpy flesh and ample breasts was Rubens’ aim – he made a permanent record of the most beautiful woman in his world. Her fleshiness is also a proof of Rubens’ success and wealth – to make his wife so plump with rich foods and leisure was something of which he was quite proud.

So if you’re feeling Rubenesque after weeks of holiday celebrations, be proud of how your body shows the love, happiness, and richness of the end of 2017. Happy New Year! 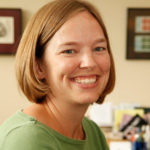