Off the Prairie: Remembering My Father on Father’s Day

My father was a doctor. I received by doctoring interest from him. My brother was similarly influenced. 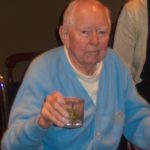 He was a pediatrician. He knew most kids in town and their mothers and fathers. He treated thousands of them and calmed a similar number of mothers and
fathers.

When he was out of the office at night or on weekends and someone needed his services, he would meet them at the top of our driveway in their cars and administer his treatment or advice. A reverse housecall. And he made housecalls, too. He was well know around town.

There was a downside to his being a pediatrician and being well known in town. If I was caught in public misbehaving, the reprimanding adult would always ask my name and say something like “you’re Dr. Kehoe’s son?” I don’t know how many stories got back to him.

His big black doctor bag was a lie detector kit. If i and my siblings would try to wrangle our way out of school and feign illness, he would start pulling instruments out of his bag and uncover our schemes.

He was born in a small town in Iowa on the edge of the prairie. His parents didn’t have indoor plumbing. He went to the state university for college and medical school and had to work his way through both while securing his degrees and training. He moved to the “big city” and bought a house with indoor plumbing. This is where I was raised along with my brot 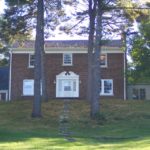 From the outhouse to our house. He typified the journey of so many in his generation who lived through the Depression and the rapid growth of the country after World War II. He worked hard, played by the rules, and tried to make a better life for his family. And he succeeded. He pulled himself off the prairie.

He not only sparked my interest in doctoring but also unwittingly and by example laid the foundation for my own future fathering. Doctoring and Fathering–maybe they are related. Maybe it isn’t too personal to write this on a medical blog

There’s more to be thankful for on this Father’s Day, but this is plenty to remember for this one day. And now I am going to call my son who is celebrating his fifth Father’s Day as a father….