Breast Cancer on the Run in October: (Day 7) The Gorilla in our Midst

October 7: ADJUVANT CHEMOTHERAPY: THE GORILLA IN OUR MIDST

Chemotherapy for breast cancer continues to be the six hundred pound gorilla in the room. I am sometimes amazed what patients will do to avoid it. If I have a mastectomy, can I avoid chemotherapy? Patients will visibly slump in their chairs when told they need chemotherapy. 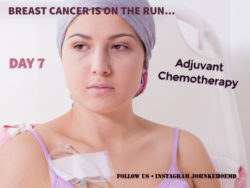 Chemotherapy for breast cancer is generally given after surgical removal of the tumor. We call this adjuvant chemotherapy. Adjuvant as a word comes from Latin and means “to aid.” In this case, it is to aid the surgical efforts.

The rationale for giving chemotherapy after surgery is to eradicate any tumor cells that might linger outside the breast and lymph node area. Tumor burden would be minimal at that time. We learned years ago that chemotherapy is more effective the smaller the tumor burden.

The rationale, then, for adjuvant chemotherapy was to expose remaining tumor cells outside the breast area to killer chemotherapy agents right after surgery.

This was only a theory until it was proven. Work from the previously mentioned NSABP and from Italy showed improved survival from adjuvant chemotherapy.

Since then improved and more effective drugs have emerged. There is now an effort to more precisely identify patients who will benefit from this therapy. More on this later….

For now, the efficacy of adjuvant chemotherapy has been established, though some still question the therapy as there is only a modest improvement in survival.

For many patients, the choice to proceed with it is a difficult one and often involves conflicting emotional and physical tradeoffs and risk/benefit analyses. Most patients don’t want to waste any opportunity to improve their survival chances.

Tempering any decision is the fact that the six hundred pound gorilla has been partially tamed by improvements in support systems for the drugs given, making the treatment kinder and gentler….Yes, that is true.