Breast Cancer on the Run in October: (Day 20) The Triumph of Breast Preservation

OCTOBER 20: THE TRIUMPH OF BREAST PRESERVATION

Slowly and painfully throughout the 1980s we came to believe that breast cancer could be treated without removing the breast and with no compromise in the likelihood of survival. Cancer care and cosmetic considerations could exist together, triumphantly. 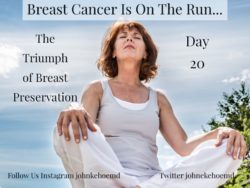 Cue the orchestra. Start the instrumental music. This was big. We have been moving towards this moment of change throughout this series.

If Halsted looms for decades over the history of treatment for breast cancer for the radical approach to the treatment of breast cancer, the work of Bernard Fisher, a surgeon who headed the aforementioned NSABP, eclipses the old master.

Actually, he resurrected a theory promulgated by Galen in the second century A.D. Galen saw cancer as a systemic disease from the beginning, as did Bernard Fisher. Thus, radical surgery to secure local control was ill advised. Fisher proved that surgeons didn’t need to remove the breast to treat the cancer.

Galen and Fisher were not the only ones who adopted this approach to breast cancer, but others in the United States and other countries moved in this direction also.

What developed was a perfect storm. Radiation therapists and medical oncologists interacted with the surgical community. Multi modality treatment was, thus, born. Additionally, mammography was becoming more widespread and cancers were being found earlier. The NSABP conducted large clinical trials. The public, through the work of activists, was paying greater and greater attention.

But the discussion among surgeons was not pretty. As a surgical resident in the 1980s, the conflict between the old guard and the newly defined breast surgeon played out in our discussions and meetings. Old notions did not retreat into the night silently. The swashbuckling old guard felt challenged and fought back against the upstarts who were seeking to redefine the role of the surgeon as more collaborative and less radical.

The new and redefined won. And the women of the world are better off because of this outcome. Breast cancer could be excised and further treated with radiation therapy and chemotherapy. And only a handful of women would need a mastectomy. Think of the women who have been spared mastectomy because of this.

This is a monumental development in the history of Medicine and Surgery.