Breast Cancer on the Run in October: (Day 25) Ambulatory Surgery and “Drive Thru Mastectomies”

You want me to do a mastectomy as an ambulatory case? I asked incredulously when approached by a hospital administrator more than 15 years ago. They wanted me and other surgeons to do large breast operations and then send the patient home the same day?  The administrator assured me that it would be better for the patient and the hospital would save money. 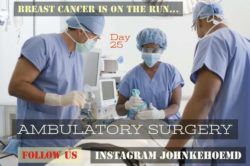 I resisted along with my colleagues. But sometime later I and my fellow breast surgeons tried it. We picked the patients carefully. Guess what? We found we could do it.

We had already been doing lumpectomies, axillary samplings, and smaller breast operations as ambulatory cases and were comfortable doing so with progress at that time in administering anesthesia. I was convinced we could now do ambulatory mastectomies in well selected cases.

I look back on my response as a surgeon in the context of much of what we have discussed regarding historical surgical resistance to change, new ideas. In the midst of taking me surgically out of my comfort zone, I reacted negatively, with a closed mind. It slowly opened.

In retrospect, I have an understanding of, but not necessarily sympathy for, what I would have to characterize as close minded, negative surgical response.

No surgery in modern times would be possible without anesthesia. Moving into ambulatory surgery to do smaller cases like lumpectomies and axillary sampling required a leap of advancement in technology, anesthesia technique, and new and better medications.

Moving to do larger operations in the ambulatory setting would not have been possible without a similar leap by our anesthesia colleagues. Better local and regional anesthesia and more precise pain management postoperatively helped the process.

Large hospitals systems are doing significant number of mastectomies as ambulatory cases as our private, free standing ambulatory surgery centers which are proliferating.

The so called “drive thru mastectomies” are now respectable. For most breast cancers, we can treat surgically in an afternoon and you can sleep in your own bed afterwards, in your own home. No hospitalization. I think that is moving in the right direction.