Breast Cancer on the Run in October: (Day 26) Back to the Future

OCTOBER 26: BACK TO THE FUTURE

Reconstruction of the breast after mastectomy with a patient’s own tissue goes back a century. The first attempts were clumsy. One surgeon tried to put a giant lipoma in the defect. Others tried to make a breast out of muscle. Others attempted to bring part of the remaining breast over to the other side for restoration. Reconstruction and a reduction on the other side. That happens today, by the way. 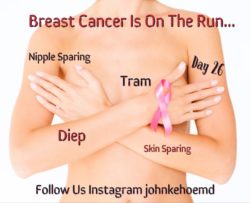 The earlier attempts were unsuccessful and arduous for both surgeon and patient. These attempts were abandoned, but the concept was curiously picked up and refined by modern plastic surgeons.

The best procedure to emerge from this is the TRAM flap. It takes a portion of skin and subcutaneous tissue from the lower abdomen and moves it with its own blood supply up to the chest to be formed into a breast.

Aspects of this procedure were refined and it became the most popular procedure for reconstruction using the patient’s own tissue for both the surgeon and the patient. While few patients complained about getting a “tummy tuck,” abdominal wall hernias were a problem.

A further development in this direction using abdominal tissue was to remove a portion of the abdominal wall and reattach it to a blood supply in the region of the breast. This was much more demanding from a surgical and vascular standpoint and had downsides. This is called the DIEP flap.

There were further developments that improved cosmesis. Sparing the skin for a more natural look was an important step. Later, it was found from a cancer standpoint that the nipple could be spared in many cases. If it had to be sacrificed, reconstructive techniques from tattooing to tissue transfers were utilized.

Interesting that our Plastic Surgery colleagues picked up on a human impulses from a hundred years ago to repair a deficit with one’s own natural tissue.

An unnatural act, breast cancer, destroys aspects of a woman’s natural self. Mobilizing one’s own natural tissues provides restoration. Restoring oneself naturally. Nice. There’s a lesson or a statement in there, isn’t there?

And thanks to the plastic surgeons.